The Idea of Using Converted Shipping Containers for Accommodation

Even though Phillip C Clark is generally considered to have been the first person to consider shipping container buildings feasible, there is evidence of earlier interest. For instance, Betjemann Christopher of the Insbrandtsen Company (originally founded in Denmark as the Isbrandtsen Steamship Company) invented a mobile showcase for trade fairs made from a rectangular cargo shipping container. The container was divided into two sections and featured two side doors that could be raised to form a canopy. These portable “showcases” were intended for use at international trade fairs and could be used to transport whatever was to be exhibited between continents. He applied for a US patent in 1962 and it was granted in May 1965.

Clark only filed for a US patent in 1987 and it was granted in 1989. He detailed a method that could be used to convert “one or more steel shipping containers into a habitable building at a building site” as well as the resulting “product”, a building that could be used as a home. He specified that multiple containers could be spaced or abutted side-by-side or mounted on top of one another. Inner side walls could be removed to increase open areas of space, a dropped ceiling installed under the top walls, and at least one window and one door provided for access and ventilation.

In 1996, James G Wiley, Jr, and Steve Forney applied for a US patent for a modular building that would have a steel shipping container core. Both inner and outer walls would be secured to the corrugated container walls and a laminate ceiling secured inside the “roof.” The container floor would become sub-flooring. Their motivation was that Clark’s invention had major disadvantages including the fact that his shipping container buildings were not prefabricated and had to be constructed on site, making them more expensive. The patent was granted to Forney in 1998.

In 1998, CMH Manufacturing applied for a US patent for a “container for prefabricated transportable buildings”. Rather than buy shipping container units, this invention proposed a self-contained, rectangular steel shipping container built to “substantially conform to standard shipping container sizes.” Built from components of the prefabricated building, it was designed to contain all the elements required to build either a two-storey duplex or double-storey detached family home. While water and sewer connections would have to be installed on site, conduits for electricity could be installed in the walls before shipping. Several suitable foundation types were specified in the patent which was eventually granted in 2002. Founded in 1987, CMH Manufacturing specialises in building modular and manufactured homes and commercial buildings, and it supplies homes according to its patent. 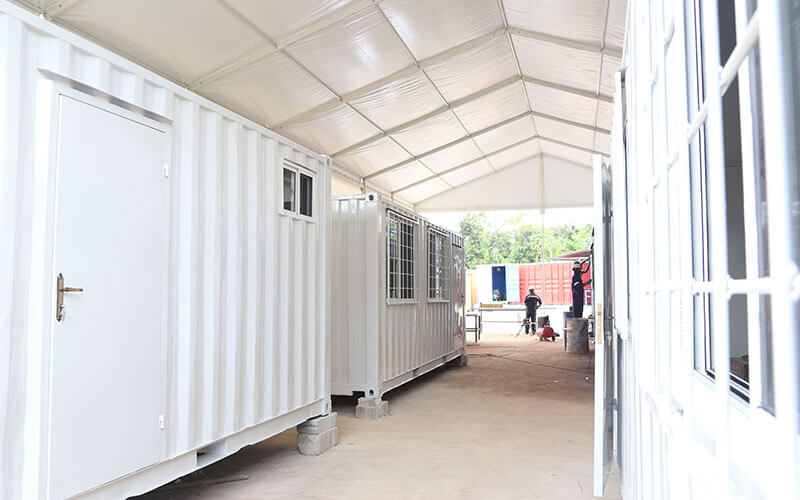 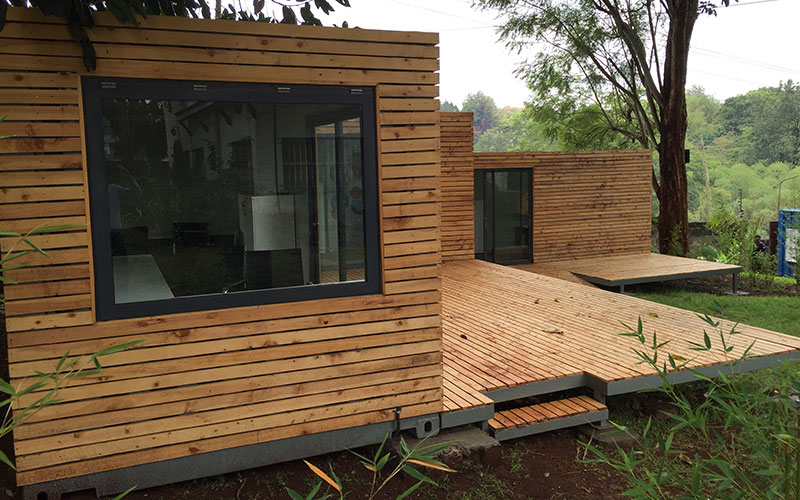 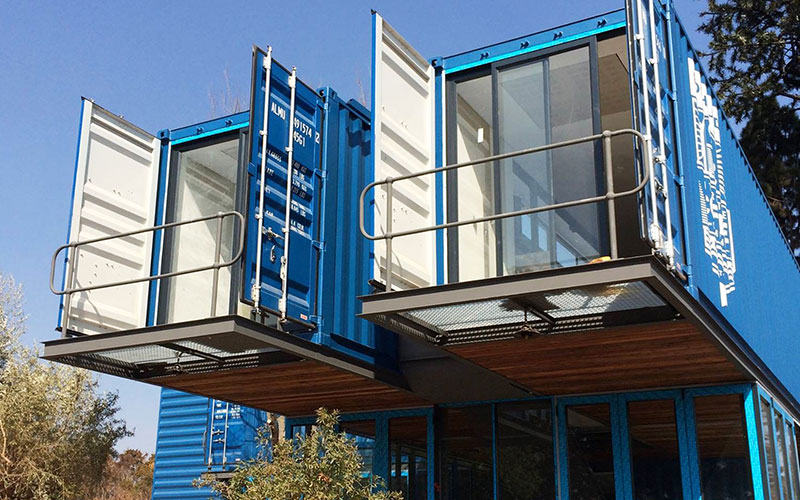 There are many shipping container buildings that have been widely publicised, some old, some new. They range from converted shipping containers made into tiny houses to huge mansions that utilise dozens of containers that are cleverly connected and clad with materials that cover the corrugated steel both inside and out.

Some of the first shipping container buildings were used for the 1985 low-budget movie Space Rage: Breakout on Prison Planet. A typical “wild west” cowboy movie it was set in a futuristic town that featured the regular general store, saloon, various houses, and of course the prison. What was different was that just about every building, including the sheriff’s house, was built from 20 and 40 ft shipping containers.

Probably the first ISO container converted for use as an office belonged to American inventor and designer, Stewart Brand, author of the acclaimed 1994 book, How Buildings Learn: What Happens After They’re Built, which was basically a study of buildings in time. Three years later, in 1997, Brand presented a six-part series for BBC TV, based on the book. He also co-wrote the series.

Another early project incorporating shipping container design was the original Container City in east London, UK, that featured 40 ft converted shipping containers used for low-cost office and accommodation in 2001. Designed by UK architect Nicholas Lacey, the concept involves the use of Container City units that are bolted together but can be easily unbolted and relocated or stored until needed somewhere else. They have subsequently been used for classrooms, youth centres, workspace, retail space, offices, and for artists’ studios.

Today there are many companies that specialise in shipping container design for both homes and offices. Almar has a range of container conversion products that are suitable for offices, workshops, clinics, and accommodation of various kinds. If you are in the market for converted shipping containers call us for more information.